Rev. Msgr. John T. Myler
"EX CATHEDRA" ("From the Chair") is THE STORY OF BISHOP DUGGAN (1825-1899). Monsignor Myler is the Rector of the Cathedral of St. Peter in Belleville, Illinois. He was ordained a priest in 1982 -- and his doctoral research and dissertations have focused on the history and theology of the Church in the United States. His research on Bishop James Duggan has included time at the Archives of Propaganda Fide in Rome; the Bernardin Archives of the Archdiocese of Chicago; the Archives of the University of Notre Dame; the Archives of the Archdiocese of Saint Louis; and the newspaper archives and the records of St. Vincent's Asylum at the Missouri Historical Society.

The historic event referred to was the near-unanimous approval given by the world's Bishops to the document Sacrosanctum Concilium, which would reform the Sacred Liturgy and authorize Mass in the vernacular.

That news flash, however, was eclipsed by news from Dallas, Texas -- by an event which would occur that same Friday, during the early evening hours, Rome time.

In the late afternoon many of the Bishops had made a visit to the Church of Santa Caecilia in Trastevere;  November 22 is the feast day of the patroness of Church music.  Cecilia's body is buried in the beautiful church built over the ruins of her house.  At 5:00 PM, Cardinal Meyer of Chicago celebrated a Pontifical Mass there -- St. Cecilia's being his "titular" church.

One group of American Bishops went to an 8:00 PM dinner at the Cavalieri Hilton -- planning to celebrate the day's good news with several of the periti (experts) who had helped compose the new liturgical document.  As they were "toasting", Archbishop John Cody walked into the room, approached the table, and announced solemnly:

"I have just heard on the radio that President Kennedy has been shot in Dallas."

They left the Hilton, silently going out into the night.


One of the Protestant "observers" at the Council recalled that his group planned to meet one of the American Bishops that evening to discuss the upcoming document on ecumenism:

Just before we left we heard by television the terrible news that President Kennedy had been shot.  We walked over to the taxi stand and took a cab in silence and prayer, for at that time there was still hope that the shot was not fatal.  When we arrived at the Bishop's room, however, we learned the dreadful truth.  After we shook hands, it was suggested that we say a prayer together, and the Bishop led us in the "De Profundis."  We sat in a stunned position for some time, listening to the latest radio reports in English.

Some of the American Bishops began to search for a church that was open, so that they could offer a Requiem.

From that Friday night on, crowds began to gather in front of the United States Embassy on the Via Veneto.  Many Italian citizens left flowers at the entrance.  Several of the Bishops from the U.S. gathered there, too.

Seeing some of the Bishops in tears, an elderly English priest observed:

For sheer devotion to Our Lord, put into practice in every part of their continent, the American Bishops stand unique.  Europe has nothing to show them in love for the sacraments, sacrifice for Catholic education, generosity toward the foreign missions.  They say little about this ...  Perhaps heroically, their young murdered President's life mirrored their own earnestness.

In his voluminous "History of the Council", Guiseppe Alberigo was to write:

The event of major international importance during the weeks of the second session (of the Council) was the assassination of J. F. Kennedy ... which was as intensely felt at Vatican II as elsewhere.
+  +  +  +  + 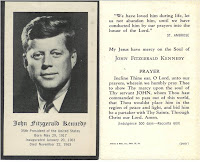 On Saturday, November 23, Cardinal Cushing of Boston was already in the U.S.  Somewhat a "maverick" among his brother Bishops, Cushing found the sessions of the Council tedious (except for the discussion of his well-beloved "missions") and generally absented himself from the proceedings.

He had officiated at the marriage of John Kennedy and Jacqueline Bouvier in 1953 - and he baptized their two children, Caroline and John, Jr.   In August 1963, just three months prior to the assassination, the Cardinal had celebrated a Mass for a third child, Patrick Bouvier Kennedy, who died two days after his birth.  When JFK was inaugurated as the 35th President of the United States on January 20, 1961, Cardinal Cushing offered the invocation.

Now, Cardinal Cushing made plans to offer the Funeral Mass for the President in Washington, DC.

While two Catholic priests were being admitted into the White House Saturday morning, to kneel in prayer at either side of the mahogany coffin -- Pope Paul VI offered Mass in his private chapel for the repose of the President's soul.

Then Paul allowed television cameras into the Apostolic Palace so that his words might be transmitted to the American people:


We are deeply shocked by the sad and tragic news of the killing of the President of the United States of America, John Fitzgerald Kennedy, and the serious wounding of Governor Connally.

We are profoundly saddened by this crime, by the mourning which inflicts a great and civilized country, by the suffering which strikes Mrs. Kennedy, their children, and their family.


With all our heart, we deplore what has happened. We express the ardent wish that the death of this great statesman may not damage the cause of the American people, but rather reinforce its moral and civic sentiments and strengthen its feelings of nobility and concord.


He was the first Catholic President of the United States. We recall our pleasure in receiving his visit and having discerned in him great wisdom and high resolution for the good of humanity.

Tomorrow, we shall offer the Holy Sacrifice of the Mass that God may grant him eternal rest, that He may console all of those who weep for him in his death, and in order that Christian love shall reign among all mankind.

In a private telegram to Jacqueline Kennedy, the Pope wrote:

We hasten to send you, beloved daughter ... upon you and your children, the consolation of divine grace, and our affectionate apostolic blessing.

The Pope also sent a private message to the late President's parents.  Mrs. Rose Kennedy had already attended two early Saturday morning Masses at St. Francis Xavier, the family's parish church in Hyannis Port, Massachusetts.  One of the Masses was celebrated at an altar donated by the Kennedys in memory of their eldest son, Joseph, Jr., who was killed as a Navy flier in World War II.

The Church of Santa Susanna, on the Via XX Settembre, was packed for the 5:00 PM Mass celebrated by Cardinal Spellman.

By that time, Washington's Archbishop O'Boyle and auxiliary Bishop Hannan were returning home for Monday's funeral.

Of the events on Sunday, November 24, one of the non-Catholic observers at the Council recorded:

This weekend all thoughts - and this seemed to include those of the whole Italian nation - were upon the death of President Kennedy.

On Sunday morning, my wife and I went first to a Catholic church - Santa Susanna ... and then to the Methodist church.  How different were the services!  And yet how similar, for in each place the worship was directed to one God who revealed himself in Jesus Christ.

... In the Roman church, we participated silently in a silent Mass, being left to our own individual prayers and meditations.  In the Protestant church, we sang, prayed, and listened together to a sermon.  In completeness of fellowship, I am convinced that in the church of the future, both of these experiences must be offered and that no one will be able to count himself a complete Christian who cannot avail himself of the particular values of each.

Later, Cardinal Ritter of St. Louis issued a statement, thanking all the Council Fathers for their many expressions of condolence and their promises of prayers:

Where charity and mutual consideration are not in possession of the human heart, there can only be hatred, of which this untimely death is one of the fruits.

At about the same hour, the President's assassin was himself  assassinated.

On Monday morning, November 25 - during the usual announcements at the beginning of the Council's day -- the death of President Kennedy was noted by Archbishop Felici.  He informed the Council Fathers that a solemn Requiem was to be offered that evening at 5:00 PM in the Archbasilica of St. John Lateran for the repose of the soul of the late President of the United States.

All the Council Fathers were invited to be present.

Then the Bishops began the Conciliar "business of the day" -- approving the decree on social communications,  Inter Mirifica.

And on the very day when the world's Bishops approved the use of new means of communication to spread the Gospel,  across the world tens of millions of men and women tuned in to the funeral of President Kennedy.

It was a Low Mass, at Mrs. Kennedy's request.  The coffin was placed at the front and center of the Cathedral.  As Cardinal Cushing, in his "familiar droning voice", offered the Mass, Luigi Vena sang from the choir loft Gounod's Ave Maria, just as he had done at the Kennedys' wedding ten years prior.

Mrs. Kennedy and Robert Kennedy were the first to receive communion.  Edward Kennedy followed.  Hundreds of others in the church also received communion ... When the celebration of Mass ended, auxiliary Bishop Hannan ascended to the pulpit and spoke for 11 minutes in English.

The church doors were opened, the cathedral service concluded, and family, prelates and dignitaries made their way to the graveside service at Arlington National Cemetery.

At the same time, the evening Requiem for John F. Kennedy in Rome's cathedral -- Saint John Lateran -- was coming to an end.

It had been less than six months since the death of Pope John XXIII.

After President Kennedy's death, one American Bishop present at the Council recalled an event "branded in (his) memory":

What I remember is this -- standing in the square in Florence, admiring Michelangelo's David, when a little Italian gentleman came up behind me and tapped me on the shoulder.  I turned around and he had tears in his eyes.  His only remark was, "We have lost our two Johns."

The Jewish political philospher Hannah Arendt, a German who had fled to America in the 1930's,  wrote in The New York Review of Books:

There is a curious and infinitely sad resemblance between the death of the two greatest men we have lost during this year — the one very old, the other in the prime of life.

Both the late Pope and the late President died much too soon in view of the work they initiated and left unfinished. The whole world changed and darkened when their voices fell silent.

And yet the world will never be as it was before they spoke and acted in it.

On November 25, at the end of a long article detailing the day of the funeral Mass and burial, the journalist Tom Wicker reported:

At 3:34 PM, the coffin was lowered into the earth.  The short life, the long day, was done forever.  And none of the pomp and pageantry, none of the ceremony and music, none of the words and grief, none of the faces at the curb,  none of the still figures in the limousines, had seemed to say more than the brief prayer on the back of the photograph of the dead president that had been distributed at the Cathedral: